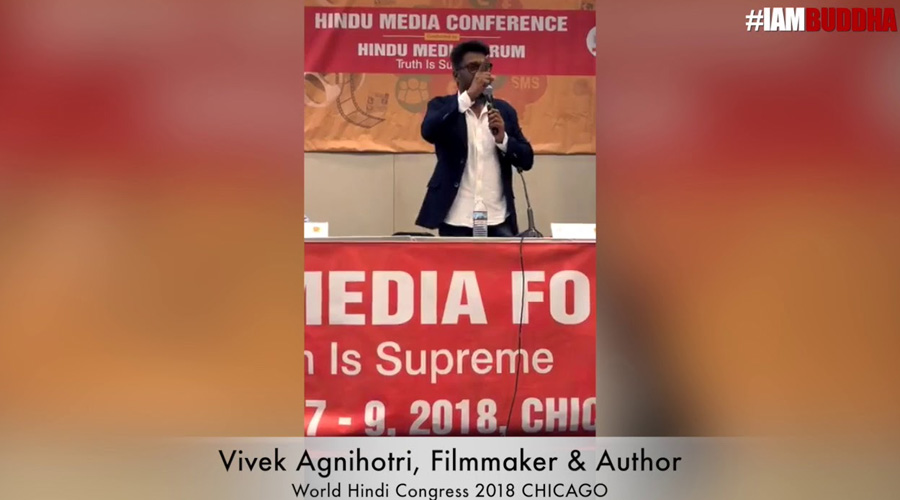 Vivek Agnihotri, a famous filmmaker & Author of bestseller title #UrbanNaxals was invited by World Hindu Congress(WHC 2018) to participate in the conclave and address people on Hindu Civilization in Chicago.

Vivek started so well by introducing himself that he is a filmmaker but he has resigned from the Bollywood and now he is a story teller; he keeps telling what he comes across; and this ability has derived from the roots he belongs. He very proudly said that he belongs to world’s longest, oldest, most liberal, most progressive, most logical, most scientific civilization called Indian civilization, more precisely Hindu civilization.

Vivek further told that today this civilization is stood at such point from where either we can show the world light, direction and guidance or we can just lost in the mediocrity. Here, to bring more clarity about what he wants to convey, Mr. Vivek Agnihotri gave the example of films being produced in 40s. Click to watch his full speech –

Vivek also quoted our former PM Mr. Nehru and shared that he was fascinated for the things which are not Indian. Vivek sarcastically said that Pandit Nehru was a great thinker but that thinking never helped us. Vivek also talked about the communist people’s dominance over the Bollywood in past some decades but he said that all the columnist, journalists or the filmmakers, despite of being the communists or leftists – they have never been the anti-India or anti-Hindu. They weren’t anti-social even.

Why Vivek cited these examples? What actually he was trying to convey? What was his message in the World Hindu Congress 2018 at Chicago? What was his philosophy behind his entire speech? To know about all these questions, click on the link above and watch entire video of him.

To know more about this vigilant Indian, Vivek Agnihotri, explore his page – https://en.wikipedia.org/wiki/Vivek_Agnihotri

To know more about his contributions apart from Bollywood, especially in awakening the people on sensitive issues like internal security threat, watch his movie Buddha in a traffic jam here at – https://www.youtube.com/watch?v=nn3hYmgK3ek&t=379s

He has also written bestseller title #UrbanNaxals on the same subject. There are many more interesting narratives and elaborations captured in wonderful book #UrbanNaxals. To know more about the book #UrbanNaxals and to get your copy, click on this link – http://amzn.in/9Rqrsa9