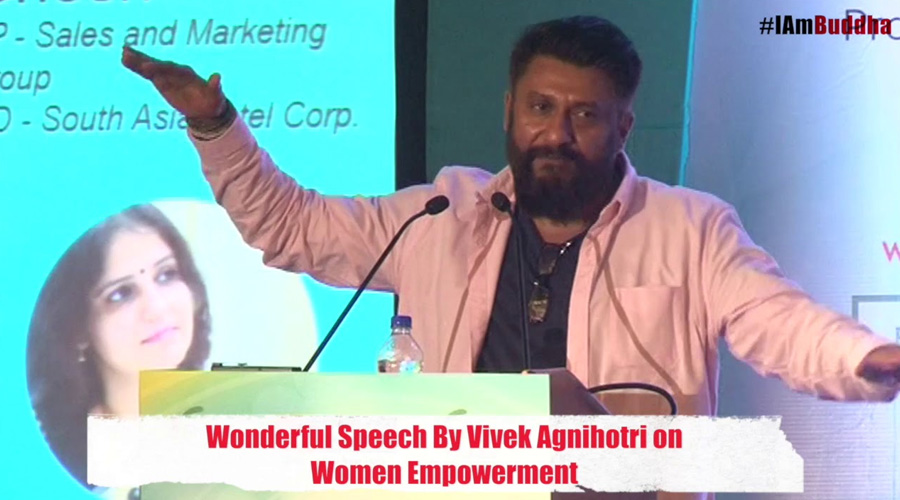 “I believe that the next revolution in this country, specially in India, is going to come because of Indian women”,says Mr. VivekAgnihotri.

He also said, “Your job is to express, not to impress”, while giving a thought provoking and powerful speech on Women Empowerment, at an event organized by the Federation of Indian Chambers of Commerce & Industry (FICCI), in March’17.He also gave examples of boxes and bubbles, where he said, “What happens when two bubbles meet? It becomes a bigger bubble, and that is the feminine power”.

Mr. VivekAgnihotri is a renowned Indian filmmaker, producer, public speaker and creative mentor. He has been working with women and girls in small towns and villages, in order to empower them. He has been mentoring creative minds under the umbrella of a foundation called #IAmBuddha.

Check out the following video of his speech where he talks about redefining and simplifying creativity and power.

He talks about wrong conditioning of minds which has resulted in silly notionslike, “they are not creative” or “this world is run by men”. It’s like a big systematic scam to him.

He thinks that the projection of womenas ‘ablanaari’, ‘Damsel in distress’ or someone who is sufferingthrough the years, have made them appear weak and that’snot true.

He also says, “we have to realize our purpose and that’s how we can bring a creative revolution”.

According to him we all are UNIQUE and are born to fulfil that purpose. Our ideas, experiences and duties are a contribution made to the world.

For him creativity is constantly evolving by adding value. He says that women have been playing so many diverse roles very efficiently thereby adding values to all our lives while making it appear easy.

His advices us to focus on expressing, not on impressing.He believes that this world cannot survive without feminine traits. We should be looking for wellness, power and creativity inside ourselves.

Watch the video to get inspired and empowered.

A very happy International Women’s Day to all.